I have been gardening since my father first took me to his allotment as a toddler. Initially only interested in frogs, I quickly found joy in participating in the process from digging and planting through to harvesting. I have been creating gardens ever since, wherever possible.

I am a firm believer in the importance of gardens to human society and have long-since held the belief that gardening should be a National Curriculum subject.

It is never too early to start gardening. Gardening offers us a chance to experience the joy of seeing our endeavours rewarded in ways that many of life’s endeavours fail to. I often encourage my students to start a little garden when they begin their Ph.D. research abroad, even if they only have a few small paper cups or a little window box, because seeing a little effort rewarded with a green stem, a flower, is a positive stimulant that all researchers need from time-to-time.

I suspect that my love of muddy gardens was what prompted me as a young adult to take an evening class in pottery, where I met a teacher who suggested I take sculpting lessons from Keith Hamlett. I studied with him for several years, creating most of my sculptures in a material called Crank.

Like most people, I handled a long, thick-stemmed paint-brush clumsily as a small child when tubs of coloured jam were put in front of me and I was instructed to paint. Also like most people, probably, I couldn’t really see the point of continuing this into adulthood.

It wasn’t till I went to Cambridge as a Visiting Scholar at St. John’s College in 2011 that I began to paint again. Brian Holt, who had developed the ‘Kitchen Method’ of painting was kind enough to demonstrate his techniques in my kitchen one afternoon. This method uses everything except a paintbrush to create art. I found this tremendously liberating. Within weeks I was painting landscapes – crude and simple, perhaps, but a source of joy. When I returned to Taiwan I introduced my simple painting techniques to my colleagues in the Chinese Department and we all enjoyed many hours of painting – often delighting at the remarkable effects of our paint splats and sprawls and other happy mistakes.

This was my painting used for my Cambridge 2013 Exhibition at St. John’s College

Only when I arrived in Almaty, Kazakhstan, did I find my first painting teacher – quite by accident. I was walking with a couple of my colleagues one bright Sunday afternoon when we happened upon a pop-up art market. We walked up and down the market several times before we bought a couple of paintings. As I hurried them into my bag a leaflet was thrust at me. When I got the leaflet home and studied it I realised that I really had to take painting lessons with this artist. I contacted him and he agreed to demonstrate some of his techniques. With Yuri Kharchenko I painted in Oils for the first time.

The painting of Port Beach in Fremantle, where I have spent many a happy hour, was my first painting and the labour of two lessons before everything had to be halted because of COVID19. As soon as the lockdown was relaxed in Almaty I asked Yuri to teach me how to paint his magical pomegranates. This painting was the fruit of my third lesson. Having completed a seascape and a still life, a self-portrait was in order. I asked my friends around the world who were also suffering lockdown to suggest items for inclusion in the background. Anyone who knows Venice will immediately realise that I have taken out two buildings to create a canal and a street scene to accommodate every suggestion, which required the full tool kit including the use of a sharpened stick! After my portrait apprenticeship I felt ready to tackle a shark. I captured this beauty on a hand-held GoPro 4 while diving off Guadalupe Island. Yuri calls her Mona Lisa! Her dimples are suspiciously similar to mine - another self-portrait?

Yuri is a very patient and talented teacher. I am so lucky to have found him.

My first Oils painted at the studio of Yuri Kharchenko 2020.
https://yuriykharchenko.wordpress.com 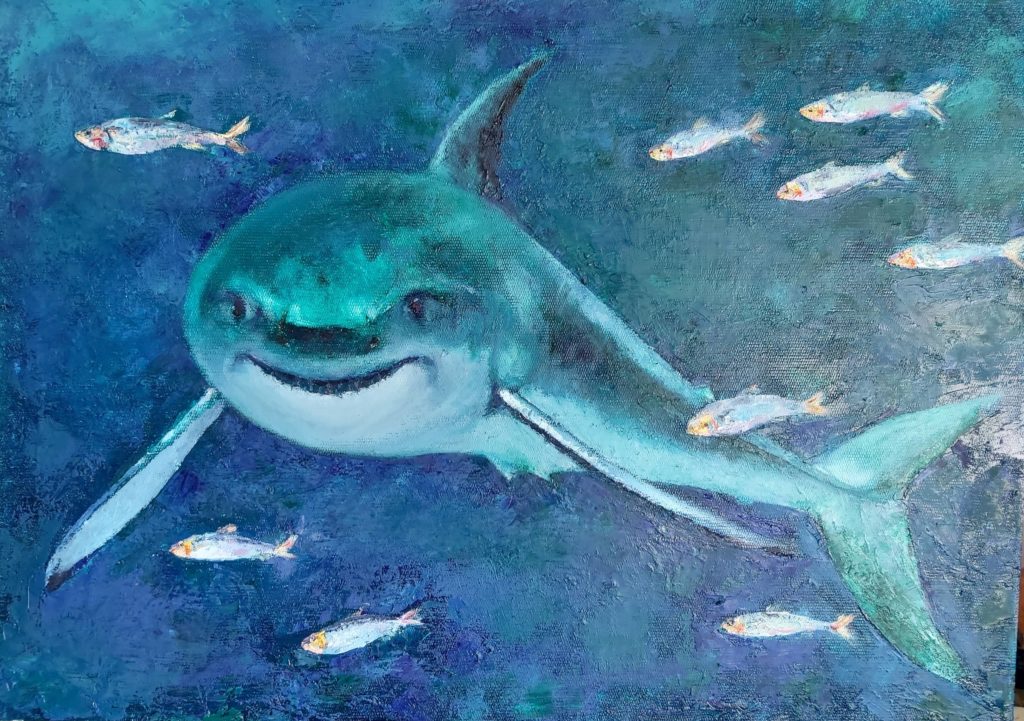 As a final studio painting in Almaty before I left for the year, I wanted to try a horse painting. The three hourses were selected from a much bigger herd and I placed them on Benllech Bay, Anglesey, one of my favourite Welsh spaces. 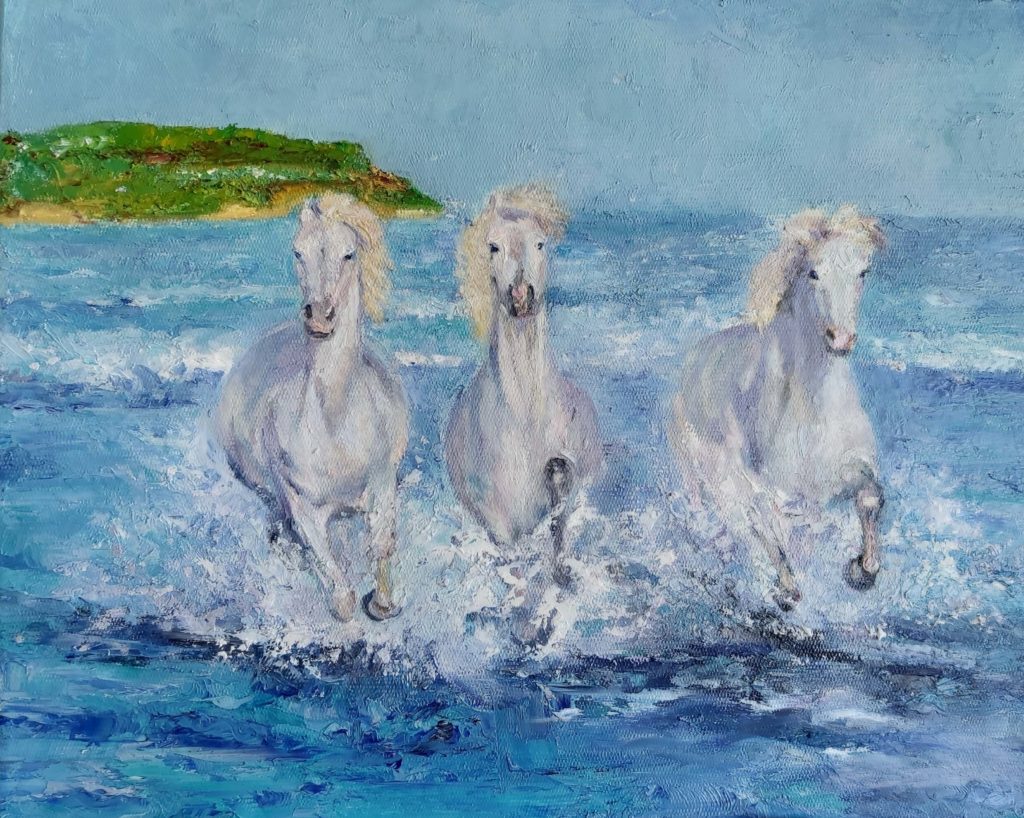 I first became interested in cooking when I was allowed to make my first apple pie from scraps when I was 4 years old. I have so many memories of watching my Grandma and my Mum creating delicious meals from virtually nothing. The greatest compliment that could be paid to a woman in the neighbourhood that I grew up in was that “You could make a meal out of a dishcloth”. I try to use more wholesome ingredients these days but always enjoy developing my own recipes to try out on obliging friends. I am compiling my simplest recipes for a book on how to eat and study.

When I suddenly developed a great interest in hosting Tapas evenings, instead of the more usual 7-course dinners, I thought I was on to a winner. What could be easier? Think again. Doing Tapas is like doing a 36-course dinner.

I had never been a particularly strong swimmer, remembering now how proud I felt when I won my purple width badge in the school swimming pool, so when I embarked upon a study of the fear of sharks at the University of Western Australia and was prompted by divers there to contact Wolfgang Leander, the renowned Tiger Shark diver, I was somewhat apprehensive.

Wolfgang was amazingly enthusiastic about my project and very generous with tales of his many photographic expeditions. He insisted that I meet his “baby girls”, which was how he always referred to his favourite 5 to 6-metre Tiger Sharks in the Bahamas!

When I dutifully signed up for a PADI Open Water Diving Course, announcing that I was actually afraid of water, naturally my instructor Gordon Groth thought I was joking. Somehow, I don’t think he will ever forget asking me why I wanted to dive and being told that I needed to research sharks in the blue archives. Having almost been thrown off the course several times, I did pull through and achieved my PADI diving license – and immediately joined Wolfgang Leander on the Dolphin Dream for the first of my shark diving expeditions.

I have now completed many dives with sharks. It is really a great privilege to be able to swim with such magnificent and elegant creatures. I can barely wait to return to Wolfgang’s Tiger Sharks – the most beautiful of all of the species.

The UK is one of the best places to walk, with such a wide range of landscapes and walking challenges. From the intoxicating, pungent, Pine forests of the Highlands that overwhelm with a fresh, gummy fragrance that is both energizing and relaxing, down to the expansive Cornish beaches and the rolling hills, valleys and mountains between, it is hard to beat and will always be one of my favourite walking spots on the planet.

The best walks are during late spring or early summer when it is neither too hot nor too cold and many of the flowers are in bloom. I and my friends walk for miles and miles and then return to one of our homes for a bath and an evening of relaxed conversation over a hearty meal.

I have always loved to dance and wanted to learn Ballet, like my cousins, but there was no question of my parents being able to afford Ballet. Ballet wasn’t just the lessons – it was lessons and then the costumes. If my mother had been a seamstress instead of a knitter this might well have altered my trajectory – but who dances in wool?! I settled for the free school gymnastics lessons, won my BAGA and AAA badges and moved on.

It wasn’t surprising that I would spend free time as an adult in gyms, but then when I joined the David Lloyd Tennis Club I found they offered Zumba, FitSteps, Salsa, as well as the must-have Combat and Circuits. I was finally able to enjoy dancing as I never thought I would. It is just too bad that David Lloyd failed to see its vision through and ultimately became like any other over-priced mediocre gym.

For a brief moment I was on the stage of the Garrick Theatre in a production of Cabaret which transferred to the Buxton Opera House. After that, there were a couple more flirtations with stage curtains but returning to academic life quickly cut the time for such experiments out of my schedule.

I have sung my entire life. My first stage hit was ‘Light the Lamp, Joseph’ which I sang for the HCS when I was six. When one of our neighbours turned to my mother and said “I didn’t know you had a singer in the family” my older sister assured her that we didn’t. I don’t suppose that has changed, but I am enthusiastic – as my Taiwanese graduate students discovered when they unwittingly sprang a Karaoke party on me at the end of one semester and found they had to virtually wrestle me to the ground to retrieve the microphone.

I took piano lessons from the age of 11 and felt bound for the stage as a concert pianist. At family gatherings I would play Moonlight Sonata to tear-filled eyes around the room. This behaviour was never fully explained to me!

I took up the guitar as an excuse to hang out with friends at the Opus Dei Saturday School and then persuaded my parents to pay a visit to remote relatives in order to cadge a violin. A great uncle who had lost his legs in WWI and had taught violin from his wheelchair had left one of his instruments sufficiently in-tact for me to learn on.

It wasn’t till I went to the University of Western Australia for the first time in 2013, and lodged in Fremantle, that I became acquainted with the Uke. Surrounded by people who could play admirably well I felt the necessity of purchasing an instrument and learning some tunes from the web. My Uke subsequently became known as my Fremantle passport. When I flew home from Taiwan in 2014 to see my mother just before she died I played all of her favourite Elvis Presley songs for her on that Uke – probably very badly. 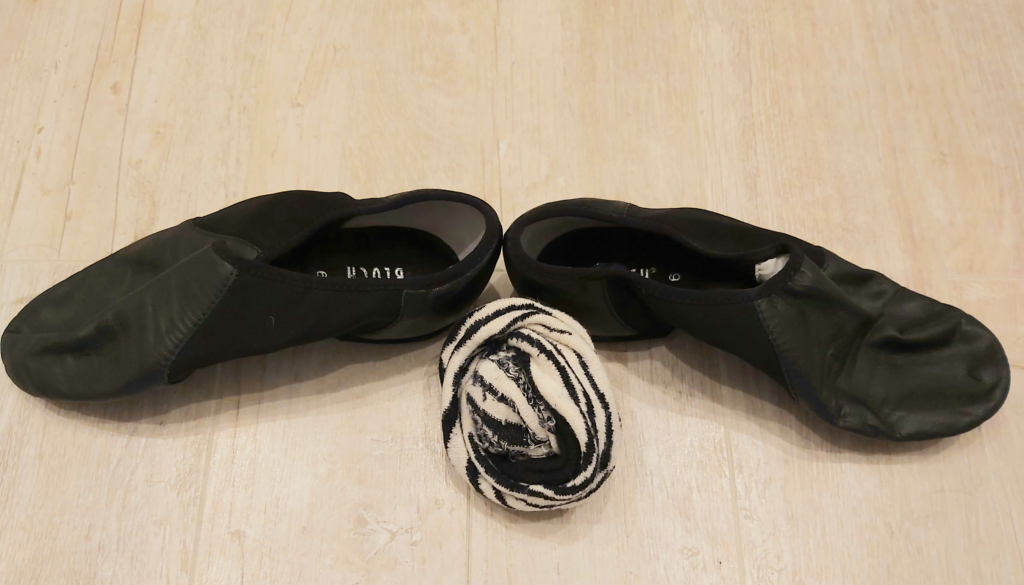 Of course, I write. I write anything, from poetry and screenplays through to academic books. I wrote my first novel at eleven, which sounds precocious. In fact, everyone in my class had to write a novel over the summer holidays – Sister Enda ‘s idea of homework! I have always written poetry, though Michael Schmidt might want me to call it something else, from as early as I can remember, variously inspired by Dr. Seuss and Shakespeare which is all I wanted to read as a small child.

One of the great pleasures of teaching both academic and creative writing is seeing students setting up writing challenges for themselves and overcoming them to their own satisfaction after much struggle and hard work. 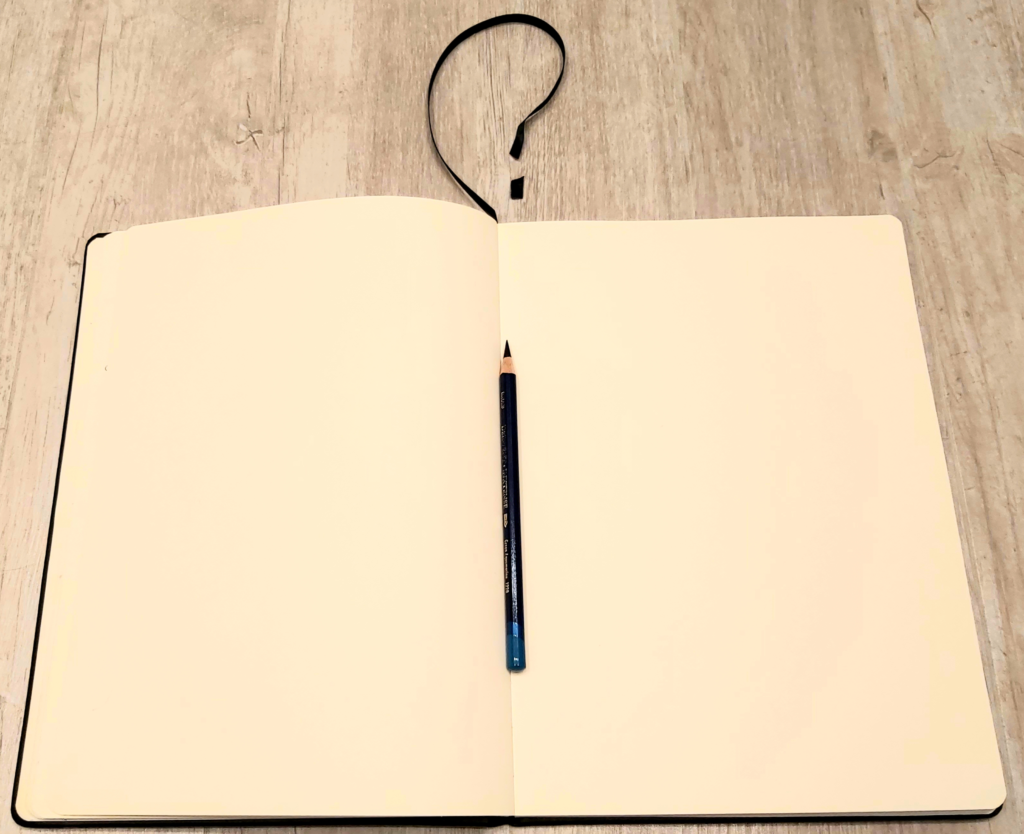